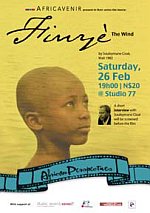 A short interview with Souleymane Cissé will be screened before the film.

About the film: Finyé is one of the finest and densest movies made on the African continent. Finyé tackles the friction between tradition and modernity in African society. The film is centered around a love affair between two university students with very different backgrounds. The father of one is a traditional chief and that of the other a military governor. The students join a mass protest against the falsification of exam results and are later supported by the chief who renounces his power and allies himself with the youth. Meanwhile the military governor, whose authoritarianism bears some similarities to Moussa Traoré’s politics as ruler of Mali from 1968 to 1991, remains firm in his defense of the government. In the end, Cissé succeeds in illustrating the power of mass protests against the government. Finyé offers a complex reflection on African culture and politics, combining scenes of everyday life with dreamlike sequences or magic rituals. Director’s Comment: "In the life of every human being there are always moments when you have to pause in order to find out what has been done and what still remains to be done. Finyé poses this twofold question."